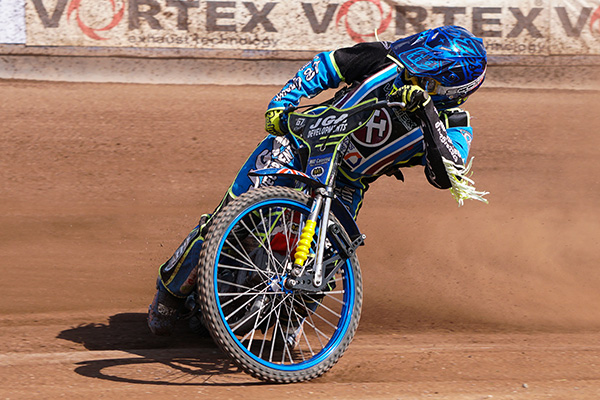 Hammers team boss Kelvin Tatum admitted a lack of pace from the tapes had added insult to injury, as Connor Locke withdrew from Lakeside’s 55-34 defeat at Mildenhall.

A day to forget for the Vortex Hammers was compounded by Locke pulling out after his fall in heat four of a meeting that was also delayed when a Tigers fan was taken ill.

Paul Hurry and Ben Morley each managed double figures but Connor Mountain weighed in with a hefty 15-point maximum as the hosts controlled proceedings throughout.

Hurry and the otherwise-scoreless reserve Jamie Couzins were the only Lakeside riders to claim chequered flags and the result was all but rubber stamped by heat 11.

There was at least one bright spot for Tatum, though, as he delivered a positive prognosis for Locke.

“Connor had an issue with his left arm and shoulder that left him unable to continue,” said Tatum.

“He withdrew with a focus on getting himself fit for Friday. He is very keen to be ready and I get the feeling he will pull out all the stops to take part.”

On the meeting, he added: “Conditions were a little difficult but they were the same for both teams and fundamentally, we did not make starts.

“Mildenhall were very sharp away from the tapes, that was a big plus for them and key to the outcome. It was a disappointing day and one we need to put behind us very quickly.”

Everyone at the Hammers would like to send their best wishes to the Mildenhall supporter, sentiments that were echoed by Tatum.

“From what we understand the gentleman is a lifelong fan who had come back off holiday to be there,” he said.

“All of us at Lakeside would like to send out our very best wishes. We hope he makes a speedy recovery.”