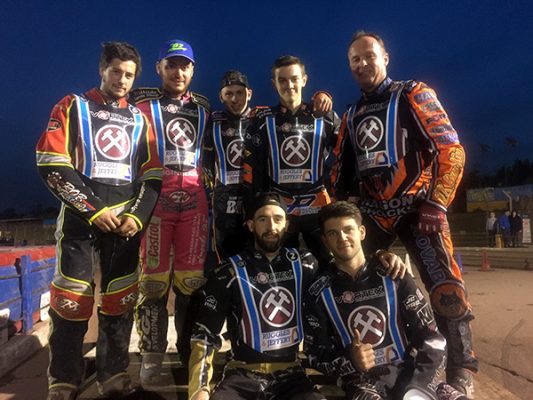 Zach Wajtknecht clambered off his sickbed to help Lakeside power to a 52-38 victory that left derby rivals Kent Kings as sick as a parrot.

The Hammers found themselves level after eight heats but veteran Paul Hurry completed a five-ride full maximum with fellow big-hitters Wajtknecht, still feeling the effects of a stomach bug, and Ben Morley registering double figures to take matters away from the visitors.

Kent made life tough early on with Alfie Botwell harshly excluded in a shared heat three that marked Hurry’s first win of the night.

Away team-mates Jack Thomas and Nathan Stoneman collided in heat seven but were granted permission to take part in the re-run because the incident had followed an unsatisfactory start. Stoneman later withdrew from the meeting.

Thomas led Anders Rowe in a Kent 5-1 that restored parity but Wajtknecht and Hurry took three chequered flags out of the next four before a thrilling heat 13 virtually guaranteed the win.

Kings number one Luke Bowen led the way but Morley passed around the outside on lap one with Wajtknecht getting by on the final circuit for a Hammers maximum.

Hurry and Morley gated on a 5-1 in heat 15 and despite the outcome being done and dusted, captain Morley battled back to pinch second place on the line having been passed by Bowen.

“The meeting was close but we handed it over the big guns and while I felt all of the lads played their part with crucial points, the top three were fantastic,” said promoter Jon Cook.

“Zach had been under the weather all week and the way he passed Luke Bowen and Jack Thomas was out of this world. Full credit to Paul Hurry for his full maximum and young Connor Locke performed well, he didn’t get the points his riding warranted.

“It was a derby that could compare to any other in speedway with a lot of feeling on both sides and plenty of incident. To be fair to Kent, they played their part in an exceptional meeting in which the quality defied the level.”