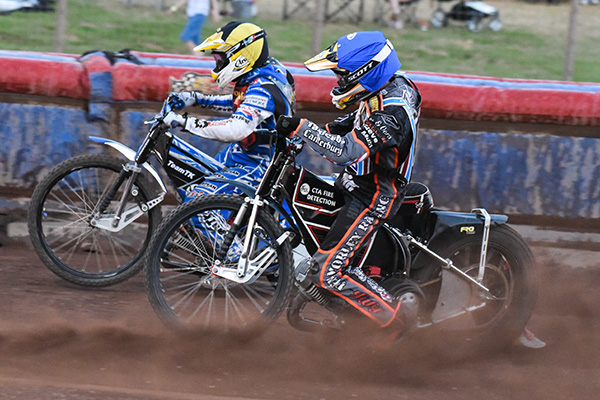 Lakeside team manager Kelvin Tatum believes they are well equipped as they aim to maintain their unbeaten home record in the Travel Plus National League against Buxton on Friday (8pm).

The Vortex Hammers have won all five of their league fixtures at The Arena-Essex Raceway this season and currently sit in fourth place.

And despite being without newly crowned British Under-19 Champion Zach Wajtknecht and in-form star Alfie Bowtell due to racing commitments in the higher two tiers, Tatum is confident his side can add another three league points to their tally.

“Of course the two absences are frustrating but there’s not a lot we can do about it apart from making sure the rest of the team get their heads down and get the job done,” said Tatum.

“We’ve booked Adam Roynon to guest for Zach. Adam’s confidence is growing with every meeting he does for Plymouth in the National League and he’s a top quality performer at this level.

We feel we can match the points of Alfie with rider replacement but at the same time we know we’re going to have to work hard.

Buxton have a got a good couple of riders who will contribute to some entertaining racing and it should be a good night of speedway that will hopefully end with another win for the Hammers.

I think we’re in a handy position right now. We are nicely placed at the halfway stage of the season to sustain a play-off push and that’s ultimately where we want to be in September / October.”

A change in the averages sees Paul Hurry move into the No.1 racejacket for the Hammers and he’ll go head-to-head with Buxton’s Matt Williamson who is enjoying his best season to date.

« Countdown to the Hitmen » Hammers march on