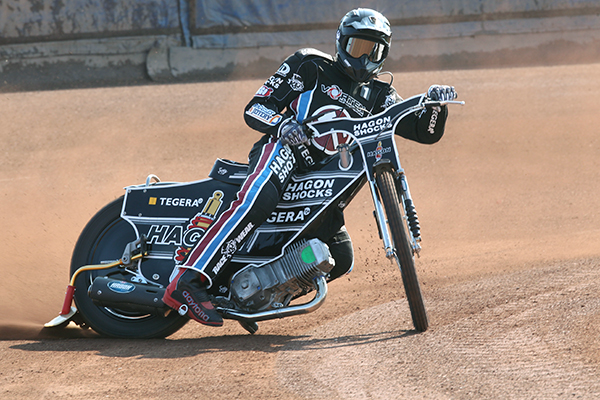 Lakeside performed last-heat heroics as they snatched a dramatic 46-44 away win over Leicester at Beaumont Park.

The Vortex Hammers completed a quick-fire double over the Lions with a battling display just 24 hours after their crushing victory when the sides met at the Arena-Essex Raceway.

The Purfleet outfit led for the majority of the meeting but were pegged back as the home side struck back to back 5-1s in heats eight and nine.

They entered the final race level – but guest Craig Cook roared to victory whilst skipper Andreas Jonsson blasted into third place to ensure they snatched victory.

It was a gutsy performance from the high-flying Hammers – and promoter Jon Cook was full of praise for the character shown by his side.

Cook said: “The meeting was on a knife-edge throughout, so we were delighted to get over the line and get the win in the last race.

Craig Cook was an absolutely superb guest for us, and with AJ he did the business in the last race which was superb.

We weren’t at our best, we perhaps had a win that was too easy last night, and we made hard work of it.

Fair play to Leicester, they made things hard for us, but the boys got the job done when the chips were down and we are delighted to get an away win.”

Cook top-scored for the visitors with 11+1, whilst Grand Prix star Jonsson also notched paid double figures. Richard Lawson bagged an important nine points in the No.3 spot as Lakeside won the battle of the heat-leaders.

Having continued their confident start to the season with two tremendous wins, the Vortex Hammers will face a tough test as they host in-form Wolverhampton in front of the Sky TV cameras on Wednesday (7.30pm)