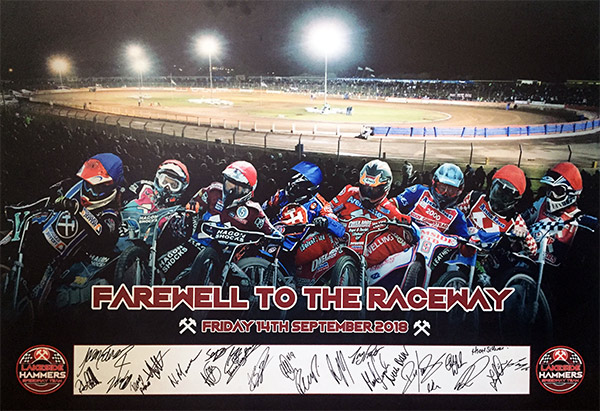 The auction has now closed. Thankyou for all of your support.

The Lakeside Hammers are delighted to offer fans a final, fabulous opportunity to acquire a truly unique piece of memorabilia which was specially created to celebrate 35 seasons of racing at the Arena Essex Raceway.

The auction will end at 5pm on Thursday 18th October 2018. Each board has a reserve price of £150 to reflect the rarity of these items.

The six highest bids above the reserve price will be accepted.  In the event of equal bids, we will accept the bid made first.  Winning bidders will be contacted on Friday 19th October. Hammers fans who are successful will be able to pay and collect their Memory Board(s) at the Championship Shield Final meeting against the Workington Comets that evening.

If winning bids come from further afield, arrangements will be made for collection or delivery.