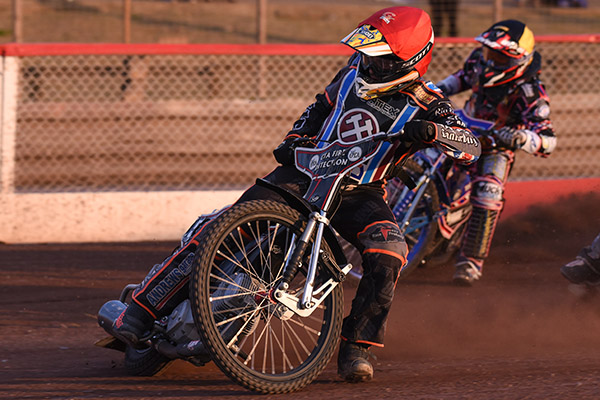 Hammers Promoter Jon Cook cut a frustrated figure as ill fortune and a lack of firepower from the lower order proved costly in Lakeside’s 45-44 loss at Kent.

The Vortex Hammers were never more than five points behind in Sittingbourne and took the lead with two races to run before falling narrowly short in a last-heat decider.

Captain Ben Morley’s fourth of five race wins gave Lakeside the edge in heat 13 but his efforts in the final showdown were always going to be in vain after guest number one Steve Boxall’s exclusion.

A mechanical issue led to the Plymouth Devils charger walloping the back straight fence, causing rival Jack Thomas to fall.

However, Cook was quick to recognise that the meagre 10 points contributed from outside the top three positions had been just as significant as any bad luck.

“It was frustrating,” said Cook. “We should have take full advantage of Kent’s problems but the luck certainly evened itself out with Steve Boxall’s bike packing up in heat 15.

“We got another point out of it, one that could be very useful in our bid to qualify for the play-offs but there was a win in the offing.

“We have to look at the fact we are very top heavy. It is a problem that has been there all season and not one that is unique to us but it certainly bit us on the backside on this occasion.

“There are four more away matches to come and we need a win from at least one of them to make sure we are in that top four. It would have been nice to get that but it was not to be and all we can do is move on to the next meeting.”