Hammers open the doors for the night.. 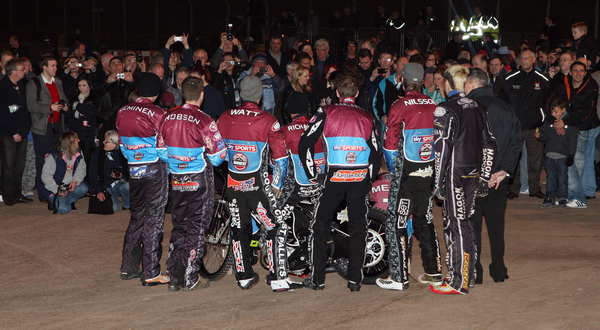 A good crowd descended on the Arena Essex Raceway as the Lakeside Hammers staged their inaugural Open Night, throwing the doors of the Raceway open to fans.

Rather than the traditional Press and Practice format, Hammers fans were provided with team photo opportunities, track walks, extended access around the pits, a mechanics wheel change competition and were also able to watch a series of practice laps and demonstration races from a specially cordoned off area on the centre green.  All proceeds from the event go towards the fund for a new air fence.

After initially taking to the track in pairs for a number of training laps, the senior squad,  along with Hammers assets Shane Hazelden and Marc Owen, then competed in the Silver Hammer competition, a series of elimination demonstration races eventually won by new Hammers rider Davey Watt.  The Silver Hammer competition was interspersed with demonstration races featuring riders from the Hammers training school, offering valuable track time to potential members of the Young Hammers team.

Absent from the track were Stuart Robson who departed shortly after the fans photocall to drive up to Sunderland ahead of his weekend Premier League commitments with Newcastle, and his Diamonds teammate Richie Worrall who is based in Liverpool and would have endured a marathon road trip, to the Raceway tonight before having to drive back up to Berwick tomorrow.

Hammers promoter Jon Cook added “It was great to see such a number of Hammers fans turn out tonight. It’s been a long winter without speedway and we thought it would be good to try something a little different.  I hope that everyone who came enjoyed the experience, either watching from the centre green or just mingling with the riders in the pits.

Although only a practice, some of the boys certainly took it quite seriously, and along with Rob and Kim spending a good few hours practicing this afternoon, it’s all looking good as we countdown to the serious business next Friday and our first Elite League match against the Aces.”

Tweet
« Robbo is ready to rock! » Hammers get down to business