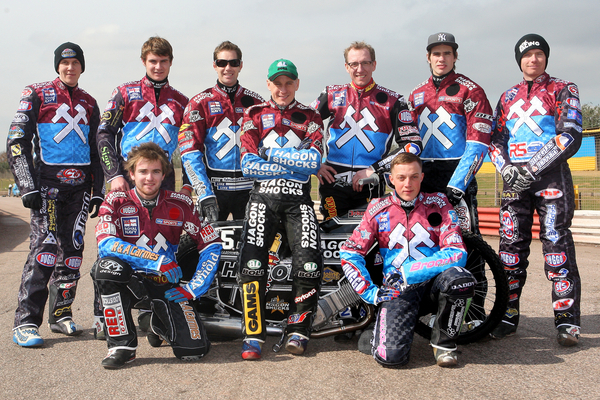 SPEEDWAY’S Elite League KO Cup springs into action next month – and fans are in for some head-to-head action as a revamped format sees something old and something new to enjoy.

Long-standing fans will again be able to enjoy the traditional 13-heat format with team managers having to work with their riders to pick the best gates for their pairings to find success, followed by an extra reserve heat and the excitement of a meeting of teams’ top scorers in a Heat 15 nominated race.

The double-point tactical ride has been banished from the competition to be replaced by Man on Man match race heats when a team is eight or ten points in arrears.

Explaining the detail, Hammers Co-Promoter and BSPA Vice Chairman Jon Cook said: “With the KO Cup rounds over two legs every single point is imperative. We think the return to the old heat format with gate choice changing from heat to heat will give team managers a greater chance to squeeze every one of those points out of their team, whether it be giving the better gate to a lesser rider to gain a heat advantage or sending out his heat leader to try to guarantee a shared heat.

“Tactically we have changed things, and in doing so we will offer the rarely-seen spectacle of a match race and the bonus of up to 17 heats for fans to enjoy.

“The Man on Man heat will see the losing team nominate a rider from their side to take on an opponent nominated by the leading team. Should he win, they will close the gap by three points whilst should this head-to-head challenge be seen off by the leading team then the scores will remain the same.

“It’s something different, and again a nod to the old days when match races were more frequent. Over the past few seasons the KO Cup had lost its gloss in the Elite League with the top tier of the sport so focused on the play-offs, and we believe this timely overhaul will give fans an exciting night’s action to look forward to.”

In the first round, The Hammers  will take on The Coventry Bees, with the first leg away at Brandon on Friday the 1st of June, and the return at The Raceway, the following evening, Saturday 2nd June.

A return to the traditional 13-heat format with alternating gate choice. Team winning toss have choice in Heat 1. No fixed gate positions and no tactical rides (except for the Man on Man heats).

Heat 15 – Top scorers nominated race. Gate choice for Heat 15 will be for the team trailing in the match, or the Home team if scores are level.

These Heats take place immediately as called by the trailing team manager. Gate choice is with that team and is either inside or outside. Both riders have full use of gates 1&2 or 3&4.

In the event of a tie on aggregate over both legs, then Man on Man scores will be deducted to decide winner, ahead of a replay if scores are still equal.